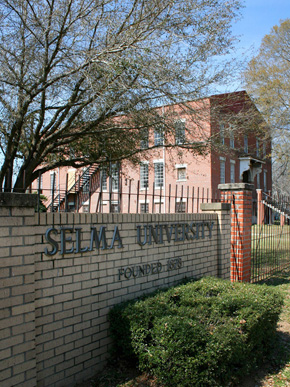 In 1868 a group of like-minded Black Alabama pastors and their respective congregations united to form the Alabama State Colored Baptist Convention. The convention was later renamed the Alabama State Missionary Baptist Convention, and the assembly worked to strengthen local churches and better promote the Christian mission, evangelism, and education.

The leaders of the convention felt that one of the most efficient methods to achieve their goal was to provide their congregation members with a Christian and liberal arts education, leading to the construction of a school to train preachers and teachers throughout the state who would go on to teach members of the congregation and larger community. The Convention established the school in Selma, Alabama and by 1878 classes were being held at Saint Phillips Street Baptist Church of Selma. The school’s name changed to Alabama Baptist Normal and Theological School of Selma in 1881, and in 1908 the institution’s name was again changed to Selma University.

In the late 1980s, Selma University became a four-year institution, becoming accredited by the Commission on Accreditation of the Association for Biblical Higher Education in the United States and Canada in February of 2009. In October of 2013, the school received a ten-year reaffirmation of accreditation with the Association for Biblical Higher Education.

Selma University also makes it a priority to provide a variety of opportunities to develop the spiritual life of its students. Students are required to attend the “Selma University Family” tradition of Chapel/Convocation period on Wednesdays, to participate in Christian Service opportunities, and provided the chance to become involved with several extracurricular activities and other student life activities such as Founders’ Day, musical concerts, religious retreats, classes, and talent shows. Students are also offered both academic and personal career counseling through the Office of Academic Affairs.

Selma alumni become scholarly and devoted leaders in all the areas they choose to serve. Some notable Selma University alumni include, but are not limited to:

The total yearly cost of Selma University is a reported $9,380, composed of a $7,200 tuition, and an estimated $2,180 of room and board and other fees. For both in-state and out-of-state residents, Selma tuition remains a $7,200 universal price.

Selma University is not currently eligible to participate in the Federal Financial Aid program, but university officials are working diligently to regain eligibility for its students.

Selma University remains committed to creating communities of academic inquiry, fostering faithful members of society, and reaching students who may be disadvantaged and have been unable to achieve normal education opportunities.

The institution continues to change lives and strives to be a great producer of graduates who demonstrate the reciprocal tenets of Christian servant leadership. Students are taught and encouraged to help themselves and others, who will then help themselves, their families, and their greater communities.