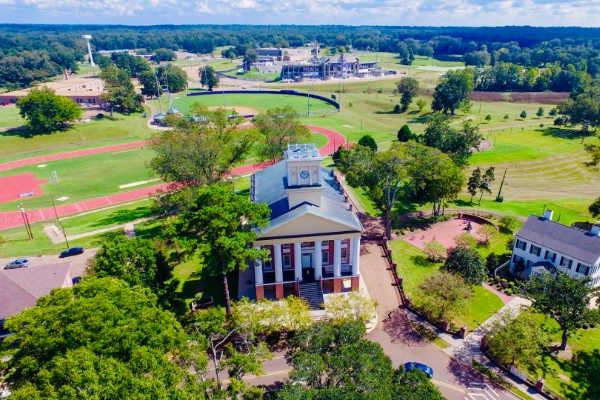 Originally founded as Alcorn University in 1871, the institution’s establishment is due to Mississippi residents’ efforts to gain education for the descendants of formerly disenfranchised and enslaved African Americans. Alcorn University is the second-oldest state-supported institution of higher learning in the state of Missisissppi, and the oldest public historically black land-grant university in the United States.

In 1878 the university’s name was changed to Alcorn Agricultural and Mechanical College, where the curriculum was largely focused on preparing students for the agricultural economy of the state. While the college was originally exclusively for male students, women were allowed to be admitted in 1895, with a dormitory for women built in 1902.

In 1974, Alcorn Agricultural and Mechanical College became Alcorn State University after Governor William L. Waller signed a House Bill to grant the status. Since its conception, Alcorn has thrived by continuously setting and accomplishing dynamic goals despite limited resource allocation from the state. What began as a student body composed by 179 students has grown to a campus of over 4,000 students with varied backgrounds. The student population is now representative of over 65 Mississippi counties, 30 states of the US, and at least 18 foreign countries.

Alcorn University aims to provide numerous opportunities for rigorous academic excellence. Through the university’s undergraduate and graduate program offerings, students are exposed to a variety of course teachings through Alcorn’s School of Agriculture and Applied Sciences, School of Arts and Sciences, School of Business, School of Education and Psychology, School of Nursing, and Graduate Studies (of which there are more than 15 study areas offered).

Through a unified connection between academic and student life offering, Alcorn students are immersed in a globally minded university culture.

Alcorn State strives to be a worthy institution that prepares students to be the leaders of tomorrow.

Some notable alumni include, but are not limited to:

Additional fees include student activity fees ($15 per semester), technology fees ($20 per semester), and capital improvement fees ($50 per semester), as well as housing fees which differ depending on whether students reside on or off campus. Financial aid at Alcorn State University is intended to make the cost of matriculation more achievable, and as such the Office of Financial Aid is eager to help students obtain the assistance needed to bridge the gap between financial resources and payment.